Enzymes and bacteria digest food inside your body. Some of the enzymes are created by your body, some by bacteria in your body and some may be in the food (depending on what you eat of course).

When you understand that it’s not really you who is feeding, but the bacteria who is feeding you begin to understand how nature works a little better. That allows you to make better food choices.

Bacteria is what eats food inside of you.

Bacteria is what breaks down a grain or seed so it can turn into grass or a plant or tree.

If an animal eats another animal (insect or whatever), it’s still bacteria inside the animal that eats the other animal.

I’m over simplifying and generalizing here. When I say bacteria, I know that in some cases there will be yeast, fungi or little worms involved in eating the food in all these cases.

Even in soil it’s bacteria that eats leftovers and turn it into rich compost where seeds and grains can grow.

That’s where food choice comes in.

Bacteria inside of you eat the same type of food as bacteria outside of you. The way bacteria eat is by releasing digestive enzymes (protein) which breaks down nutrients to a point where the bacteria can absorb them.
Remember, for that to happen you need the right water, minerals, pH, temperature and enzymes (from bacteria). 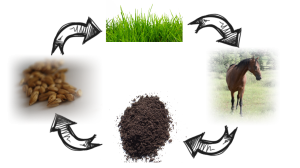 When we look at the food cycle we can begin to understand certain things we didn’t understand before.

For example, how does grain grow into grass?

Grain has starches, protein and fats inside. That is food for bacteria. It’s what the plant eats, it’s what animals like chickens eat, it’s what we eat.

That food however needs to be broken down first before the bacteria can actually absorb it. For that, bacteria will go in and release digestive enzymes.

This happens when the 5 essential components are present.